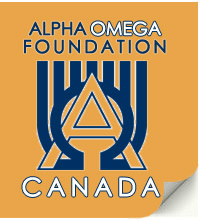 The Alpha Omega Foundation of Canada (AOF) was incorporated on November 17, 1970 as a duly registered non-profit charitable foundation under the laws of Canada. The AOF is a separate organization that is closely associated with the other charitable foundations of the Alpha Omega International Dental Fraternity. Currently there are foundations in the United States, which was also started in 1970, the United Kingdom and in Israel. Donations made to the AOF are distributed either as designated by the donor or by the Board of Directors that meets annually, usually in November.

All members of the Alpha Omega Dental Fraternity in Canada are also members of the AOF in Canada. Each member pays a nominal annual amount to the AOF, usually through the chapter in his or her home city.

The Board of Directors has representation from different parts of Canada. According to the AOF charter, the foundation is allowed six Directors. Currently the Directors come from Toronto, Montreal and Calgary. The Directors move up a line holding each position for a two-year period. Once a Director has served as president, he or she becomes a Director Emeritus and is allowed to attend and participate at meetings but not vote. The exception is the secretary-treasurer. This individual holds the position for an extended period of time, often exceeding ten years, as it is the secretary-treasurer who is responsible for the day-to-day workings of the foundation.

The AOF has supported many worthwhile organizations with a relationship to dentistry over its 43 year history. The foundation made a commitment to support the two Israeli dental schools on an annual basis and funds are given each year to the schools at the Hebrew University in Jerusalem and the Tel Aviv University.

In 1991 the Directors established a Research Fund. This fund was designed to provide assistance to students doing graduate or post-graduate research in a field with a relationship to dentistry. A panel of Directors reviews the applications, makes recommendations to the board, and awards are announced at each annual meeting. The first grants were awarded in 1993 and 65 grants have been given through to the 2012 annual meeting.

In 2000 the AOF received a substantial bequest from the late Mrs. Etta Sherman, wife of the late Dr. John Sherman. Through the terms of this gift the Directors have been able to recognize many undergraduate Alpha Omega dental students for their scholarship and leadership abilities.

Many people have served as Directors and advisors to the foundation over the past 43 years. It is thanks to them and their dedication and hard work, all on a volunteer basis, that the foundation continues to be a viable charitable organization within the profession of dentistry.

The International Alliance of Alpha Omega Charitable Organization, formed in 2011, was created with the purpose of sharing ideas and information between the existing charitable organizations of the U.S., Canada, London, and Israel. It allows for our Foundations and TRusts to better communicate, reducing duplication of services, and opening opportunities for new giving. Fundraising projects of an international scope are agreed upon and supported, and the synergy created enhances the overall end result. In addition, the Alpha Omega Chapters in France, as well as other countries that do not have formal foundations, participate in the Alliance. We foresee that the Alliance will serve to educate our members as to what is possible in the arena of giving, in both money and with in-kind services, within the realm of our Global Oral Health Initiative (GOHI).

In 1953, the fraternity's leaders recognized a need to replace retiring and aging immigrant dentists in Israel with new generations of well-trained practitioners. In response to this need, Alpha Omega set an extraordinary goal to raise money for the building of Israel's first dental school; and in 1966, with the opening of the Hebrew University Hadassah School of Dental Medicine, founded by Alpha Omega, they realized their dream.

Chartered in the US in 1969, the first Alpha Omega foundation was created to continue to support the School and engage in additional philanthropic projects. Subsequently, in 1981, a similar fundraising campaign was mounted to construct the Tel Aviv University Maurice and Gabriella Goldschleger School of Dental Medicine, founded by Alpha Omega. Since the original construction, both schools have undergone extensive remodeling and additions, with the combined support of Alpha Omegans all over the world, to keep the facilities on the cutting edge of scientific, academic, and clinical advances.

Both schools have made, and continue to make, major contributions to the science of dentistry, and to the dental health of the people of Israel.

Foundations with similar missions have been chartered in other countries in order to comply with their local tax laws, Canada (1970), the London Trust (1972), and the Israeli Foundation (1983). The combined international charitable contributions of Alpha Omega's members, chapters, foundations, and trusts over the years are estimated at over 60 million dollars.